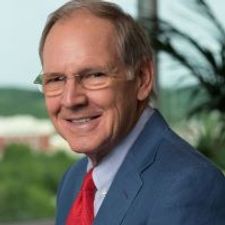 David Andrews,a true innovator, exemplifies the model of a Tennessee entrepreneur.  A life-long Tennessean, Andrews has been in the automotive retail business since the early 1970s.

Today, Andrews is the CEO of City Enterprises LLC, based in Franklin, TN, which is the management company and parent entity of City Auto Sales, City Auto Finance, City Leasing, Dealers Auto Auction Group, Pace Financial and AutoNext. The company operates in the Southeast and employs over 900 people in its various divisions. Ever inspired for growth Andrews is focused on expanding the company’s footprint in Tennessee and throughout the Southeast.

Giving back to the community is equally as important to Andrews. Andrews encourages each of his general managers to select a local civic or charitable cause that is meaningful to them and their team and support it with volunteer hours, sponsorships, and fund-raising. Through partnerships with local non-profit and civic organizations, Andrews, his managers, and his employees make significant contributions to organizations that build stronger, healthier communities. In 2014, the company was recognized by Association of Fundraising Professionals with the Crystal Award for Corporate Philanthropy for its leadership as an engaged corporate citizen – prior winners have included Federal Express, AutoZone, First Tennessee Bank, and others. Annually companies owned by Andrews fundraise and distribute hundreds of thousands of dollars.

Andrews leadership impacts the industry as well as the community. In 2013, he was inducted into the Society of Entrepreneurs, a membership organization that recognizes innovation in leadership among business owners and executives of merit. Andrews currently serves on the nominating committee of this organization.

Andrews led the National Independent Automobile Dealers Association as the dealer association’s 2017-2018 President and for the last two years serving as Chairman of the Board. Andrews is a past president of the Tennessee Independent Auto Dealers Association (TIADA). He also serves on several boards including the Better Business Bureau of Memphis, Triumph Bank, and the Wells Fargo Advisory Committee.

Learn the perspectives from independent auctions around consignment mix, physical vs digital auctions, and how they are looking to the future. More Info